Sandro Fratini, probably the man behind the most valuable watch collection in the world

When one says, “I had the pleasure of meeting someone…” in the case of Sandro Fratini, the word “pleasure” is certainly appropriate. Fratini made me feel immediately at ease when he welcomed me to his new office in the hills of Florence; needless to say it had breathtaking views of the city below. The man is in his sixties, tall, handsome and often with a large smile on his face. When he was a boy, he developed a great passion for watches—for his first communion, he was given a “basic” Longines and that started it all. A few years later, when he was in high school, he would save part of his allowance to buy Universal Genève watches, one of his first loves, “while my friends spent all of their money on drinks and dates.”  Dates, for this Florentine gentleman, would have to wait until a little later.

Sandro Fratini was fortunate enough to grow up in a wealthy family and he began studying and collecting watches with a very refined taste, something that was rare at the time. “In the 1970s everybody was buying contemporary watches,” he said. “People were fascinated by the Quartz technology that was all the rage, but I wanted watches from the 1950s or 1940s.” It’s a paradox to say so, but his love of vintage watches put him way ahead of his time. He would go to watchmakers and ask them not only for spare old watches but also for movements, dials and parts in general. “People looked at me as if I was a freak,” he said, and he was a freak—in all probability, the first watchfreak in history!

Just think of how difficult and slow it was compared to today to get to know a brand, find a reference, and then jump to another similar watch, study a movement, discover its specs… No cell phones, no google, just books and talking to people who knew.  Fratini was also lucky to travel for his job, so he could look for watches in Asia or America, thus covering a huge area of “watch hunting”. And being alone, the hunting was easier: “From Sao Paolo to Hong Kong, I would go and buy everything”, he said. “It was a time when you could actually find a big catch at the Caledonian or Portobello markets. I would wake up at 5 a.m. and the sellers didn’t always know the value of what they had.”

One of his favorite anecdotes happened in Cuba in the early 1980s. As usual, as soon as he arrived somewhere, he spread word that he was willing to see important watches and eventually buy them. An old woman came to show him her late husband’s watch that that she held in a cookie box. It was a Patek Philippe chronograph with round pushers and a pink dial. Fratini almost fainted from shock. She asked him $10,000 for it and he gave her double without a second thought.

His most exciting catch was another Patek Philippe, the much sought after double crown, ref. 2523. While staying in Miami, Fratini got a phone call from a mysterious Romanian who said he had it for sale. After a short while and without even seeing the watch, Fratini decided to call the bank and give the green light for a $250,000  transfer to Romania. “I was told that the watch was going to be proposed to some auction houses and there was no time to think,” Fratini said. “You have to take the risk, otherwise you don’t catch anything.”  When he finally unwrapped the watch, one can imagine his heart beating out of his chest in anticipation and fear, but…. Fratini and the Romanian vendor would end up becoming good friends.
Thanks to a collaboration with Christie’s, we can see part of the Fratini collection (around 600 timepieces out of more than 2000) in a marvelous book, My Time (Fam Publishing). The watches are whimsically presented on denim fabric, in recognition of Sandro Fratini’s father, who, in the 1950s, founded the clothing company Rifle which is famous for its jeans.
And if you want to live the greatest, most all-encompassing watchnerd experience of your life, you can always book a stay in one of Fratini’s L’O hotels (The L’O comes from the word “ l‘orologio” which means “the watch” in Italian). There are already locations in Florence and Venice, and another is going to be opened in Rome soon. Each floor is dedicated to a brand, each room to a reference, and there you can even buy one of Sandro Fratini’s watches, but unfortunately they are not ones from his collection, just colorful rubber quartz watches, the only ones Fratini wears, and his very own creations. Because, as he told me, “You don’t show off a love of yours, you keep it for yourself.”
(in the pictures, you can see the 2 Pateks in question, the pink dial from Cuba and the “Romanian” double crown… + Sandro Fratini’s rubber L’O watch in the 1st blog photograph) 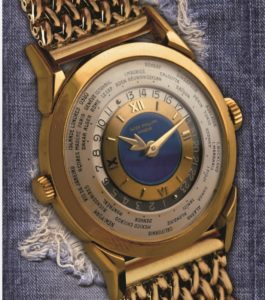